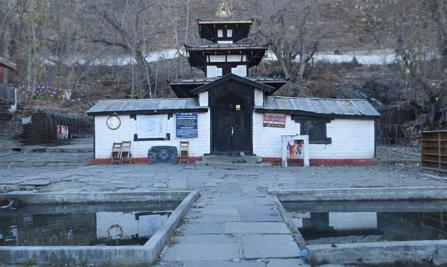 Muktinath is a holy place both for Buddhists and Hindus located in Muktinath Valley (behind the Great Himalayan Range) at an altitude of 3,800 meters, on the way to Annapurna Trekking route, Mustang, Nepal. Mukti Kshetra which accurately means the "place of freedom or moksha" or where the temple of Muktinath is situated, is stated in the Hindu Sacred scripture such as the Ramayana, Barah Purana, and Skanda Purana. There are 108 divine water springs where pilgrims take a ceremonial bath. Nearby is a temple called Jwala Mai considered holy and worshipped by both Buddhists and Hindus. An everlasting blue flame keeps burning in the temple.

The place partially owes its fame to the fossil stones, called Shaligram – considered sacred by Hindus - found sideways to the Kali Gandaki River. The fossil stones are said to indicate Lord Vishnu in stone form. The temple devoted to Lord Vishnu is simple in architecture and built-in pagoda style. It is believed to have been built at the beginning of the 19th century. As the idol of Vishnu is measured to date from the 16th century. Many Hindu pilgrims from Nepal and India visit the site for devotion to Lord Vishnu. Buddhists name it Chumming Gyatsa, which in Tibetan denotes 'Hundred Waters. Although the temple has a Vaishnava as the source, it is also admired in Buddhism