Activity in Kathmandu and Pokhara 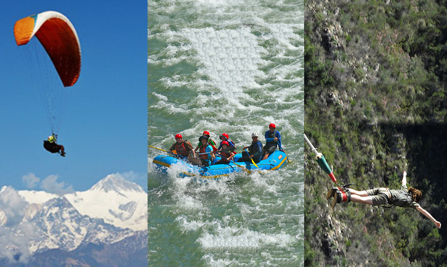 01: Mountain Flight: From Kathmandu Only

Mountain Flights are being operated every day early morning from 6:00 AM to 7:30 AM. Currently, three major airline companies are providing this facility. Depending upon the booking 10 -12 flights are being operated daily. Mountain flight offers the comfortable option of the Himalayan experience. The one-hour mountain flight from Kathmandu takes you close to the highest peaks of the world lying in Nepal, including Mount Everest. During the flight, you will get to see Gosaithan (also called Shisha Pangma), Dorje Lhakpa, PhurbiChyachu, ChobaBhamare, Gauri Shanker, Melungtse, Chugimago, Numbur, Karyolung, Cho-Oyu, Gyachungkang, Pumori, Nuptse and, of course, Everest. Mountain flights are accessible by numerous airlines in the morning from the domestic airport in Kathmandu. Flights from Kathmandu expose the Eastern Himalayas, while the flights from Pokhara show you a bird’s eye view of the Western Himalayas.

Trisuli River ( Utmost prevalent Rafting Area in Nepal )  This can be organized en route to Pokhara. The Trishuli River is considered a high commercial whitewater sports destination in Nepal due to its easy accessibility. It is an exceptional river for those who are looking for a day short rafting trip and short multi-day trip without the risk and challenge of big waves with its attractive scenery, peaceful environment, and delightful local cultural activities. During the monsoon season, the water level rises, so the strength of the waves increases and attracts rafters to challenge with a real adrenaline rush.

03: Paragliding
Paragliding is a comparatively new adventure sport in Nepal and is the simplest, safest, and least expensive way of discovering the joys of flying alone to experience the aerial views of the magnificent Himalayas including the mesmerizing view of the city. Sarangkot, 1,592m above Lakeside in Pokhara Valley, is the jumping point for paragliders. From here, one can spectate a stunning view of three of the world’s highest peaks (above 8,000m), namely, Dhaulagiri, Annapurna, and Manaslu. In addition, the tour offers mesmerizing views of gorgeous lakes, bird’s eye views of Pokhara city, monasteries, temples, etc.  One doesn’t need to have the experience to paraglide, as there will be qualified pilots to take you through the memorable tour. According to my preference, it’s a must on one’s bucket list as it’s once in a lifetime experience. The flying season in Nepal inaugurates in October and runs till June.

Ultralight aircraft is an ideal way to experience the panoramic view of the Himalayan range right in front of your eyes. The flight takes off from the Pokhara Airport and is operated almost throughout the year except during the monsoon (June to August). The flight takes place from sunrise to 11 am and from 3 pm to sunset every day, provided when there is no rainfall. During the half-hour flight, one flies over Pokhara city, Phewa Lake, Sarangkot Hill, and gets close to Machhapuchhre Mountain, another option is to explore the Annapurna range from 12,000 feet or higher in an hour.

Those looking for an adrenaline rush will find countless opportunities in the Himalayan nation of Nepal. Highground Adventures Nepal has introduced the most extreme zipline in the world. The legitimately named Zip-Flyer Nepal is the world's tallest, fastest and longest zipline in the world positioned in Sarangkot- one of the most attractive places in Nepal. It is not just another zipline; it is inclined at 56 degrees, 1.8 km in length, and a 2000ft vertical drop. You zoom through the air at up to 160km/h with the Zip-Flyer making it the most extreme ride in the world. You can feel the wind in your hair as you gush down overlooking the majestic Himalayas and a mind-boggling 2000 feet vertical drop. After a minute of the pure adrenaline rush, and traveling a distance of almost 2km, the ride begins to slow down as you approach the landing. The innovative, magnetic braking system then brings you to a complete stop. During the ride, you'll get to experience the breathtaking views of Mount Fishtail, the Annapurna Himalayan range, and the raging Seti River.

Bungee jumping is an activity that includes a person jumping from an insignificant height while attached to a large elastic rope. The tower is cantilevered over a river together with a 50m cliff in Hemja. Free fall for 5 seconds in a blitz of pure fear and adrenaline rush. It is Nepal’s first and only tower Bungee, it has something for everyone. It’s only 20 minutes away from Pokhara Lakeside, the jump site offers a mesmerizing view of the Himalayas, the hills, and the rivers that will take your breath away. The experienced team will be there to manage the entire bungy experience. You will be in safe and steady hands when you jump with experienced professionals – leaving you free to focus on the sights, the sounds, and the once-in-a-lifetime experience.

07: Bungee or Swing The Cliff

Kushma Bungee Jump is Nepal’s highest bungee and the world’s second-highest bungee Jump which scales the height of 228 Meters. Kushma Bungee jump spot is located on the border of Baglung and the Kushma district of Nepal. These two districts are connected by, 520 Meter suspension bridge in the gorge of the Kaligandaki river. There are other two bungee jump spots in Nepal besides this, The Last Resort and High-ground Bungee Jump with heights of 160 Meters and 70 Meters respectively.
Kushma Swing is a popular activity you can do on The Cliff. . Kushma Swing is the world’s highest swing which is 228 meters in height. You can enjoy the free fall of 6 seconds which is longer than the bungee jump. The platform of the Kushma bungee and Swing is the same and the only difference is the use of rope and the nature of the dive. One goes horizontal and another is vertical.